I have just got back from Brno in the Czech Republic...

Jenny Hill, my colleague from International Relations and I spend wonderful 48 hours in Brno, the Czech Republic's second city after Prague. I was speaking at the International Dalton Conference which is a project linking together Brno, Utrecht in Holland and now Leeds! The Conference brought together educators and academics from all over the world who are interested in the Dalton method... which is about personalisation, coaching and student choice. Jenny and I flew the flag for Leeds and everyone was inspired by what we are doing.

Our visit was hosted by Vladimir Moskovan, Headteacher at the Chalabalova Scola in Brno and Milos Sifalda who is the politician heading up learning in this part of the Czech Republic. Jenny and I also met local and regional politicians and officials and visited Zakladni Scola, Milanova and the Vejrostova Gymnasium which specialises in English and Spanish.

It was a fantastic visit and Jenny and we both learned a lot which we hope to use back in Leeds. Interestingly, the audience at the conference was almost entirely women, as is the education workforce. It is apparently really hard to recruit and keep teachers in the Czech Republic who are only paid around £4500 a year with headteachers earning around £9000... still beer is only 35p a pint!

You can find out more about the Dalton method by visiting their website at www.daltoninternational.org. We hope that a future International Dalton Conference will be hosted in Leeds... although with flights, hotels and living expenses so cheap in the Czech Republic perhaps we should all go there for the conference!
Chris
Posted by Chris Edwards at 10:02 No comments:

I am going to Brno in the Czech Republic from Wednesday morning until Friday evening...

I am going to the Brno-Utrecht-Leeds 2007 Conference "Inspired by Dalton" to present a paper on 'Brilliant Learning in Brilliant Learning Places'. The blog may not be updated for the next few days unless I have the time and I can get online in Brno. I'll try!

Enjoy the Bank Holiday and a long weekend!
Chris
Posted by Chris Edwards at 15:43 1 comment:

Email ThisBlogThis!Share to TwitterShare to FacebookShare to Pinterest
One of my colleagues has had a go at me about the blog and I would welcome some feedback...

The colleague, who I hold in high regard, wanted me to know how cross she was because her school wasn't on the blog as a brilliant place. I explained that the blog is a diary of places I have been and my reflections on the time I spend with colleagues and young people. It isn't and can vever be a comprehensive account of the best of Leeds... I simply hadn't been to her school recently.

She also wanted to know whay I was so positive about schools, colleagues and children since her understanding of the schools and the colleagues I had visited was very different. Again I explained that being positive is a state of mind and that if you look for brilliant you very often find it. It is also important to praise in public and to criticise in private.

However my colleague said that this undermines the real value of my comments and my feedback because if everyone is brilliant, talented, gorgeous and wonderful what's special about that. I can of course see what she means and I have had this conversation with other colleagues before... but can you ever be too positive!

I would welcome your feedback to help me further improve the blog.
Chris
Posted by Chris Edwards at 10:35 6 comments:

CONGRATULATIONS to Helen Sanderson, Headteacher and the brilliant choir at Meanwood CE Primary...

The choir came first in the Hard Choral competition on Natasha's Weekend Breakfast Show final last Saturday at the BBC Maida Vale studios in London where they had to sing in front of three judges. 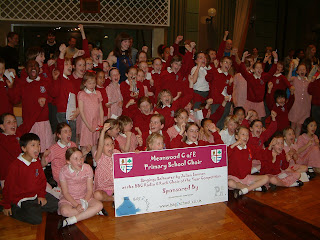 Their prize is two weeks of airplay on BBC Radio 6.
What a fantastic achievement!
Chris
Posted by Chris Edwards at 16:17 No comments:

Email ThisBlogThis!Share to TwitterShare to FacebookShare to Pinterest
I started the day with the Education Leeds Learning Environments Team...

This team has transformed the learning landscape here in Leeds over the last six years... and, while I know that a lot of people still have grumbles and concerns about the condition and suitability of school buildings here in Leeds, we have achieved some incredible things.

The PFI programme, the BSF programme, the School Partnership programme and the Capital Programme are transforming the school estate. The intelligent and focused use of resources has resulted in a huge programme of minor works as well which means that the learning landscape is largely unrecognisable compared to what we inherited in 2001.

Thanks must go to this team of brave souls who have rolled their sleeves up and simply got on with it... despite the criticism and the negativity.

Their legacy is there for all to see and it's brilliant.
Chris
Posted by Chris Edwards at 13:41 2 comments:

Email ThisBlogThis!Share to TwitterShare to FacebookShare to Pinterest
My colleague Jane Haswell sent me this message over the weekend which I wanted to share with you...

Hello Chris
Please find attached pic for your blog. In May I will start working with Valley View, 5 Lanes (who have told me they have 17 parents) Asquith and Westerton. I have felt really honoured by the amount of interest in the course from both schools and parents. Everywhere I have gone the parents have been very enthusiastic and committed with only 3 people dropping out in total.

I have worked for Education Leeds for many years now, in fact I started out as a dinner lady some fourteen years ago and have slowly worked my way up. I would like you to know that to write and deliver this course has been a big personal challenge for me because I have never had much confidence in my abilities, so have never dared take any risks. It has all been made possible by the impact that IiE and STEPS has had complimented by the Degree course I am doing and the confidence that Chris Bennett (my line manager) has in me.

I know you often ask people to tell you what they are passionate about, for me this is it.
Jane
Jane also sent me this photo of the group. 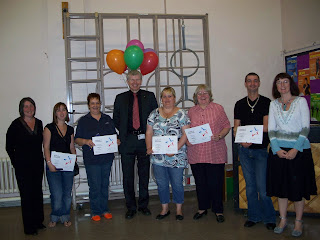 Fantastic people, like Jane, are making such a difference here in Leeds.
Chris
Posted by Chris Edwards at 08:03 3 comments:

Colleagues have asked how they can keep in touch when I leave Education Leeds.
You can send me an e-mail at chrisedwards51@hotmail.com.
You can also continue to visit this blog or my new blog http://releasing-the-magic.blogspot.com/.
Keep the faith!
Chris

Every school I have ever visited has outstanding practice, outstanding colleagues and things worth sharing! Please let me know if there is anything you want to share and celebrate.
Chris

“I must accept life unconditionally. Most people ask for happiness on condition. Happiness can only be felt if you don't set any condition.”
Margaret Lee Runbeck

“Most true happiness comes from one's inner life, from the disposition of the mind and soul. Admittedly, a good inner life is difficult to achieve, especially in these trying times. It takes reflection and contemplation and self-discipline.”
William L Shirer

“The pursuit of happiness is a most ridiculous phrase: If you pursue happiness you'll never find it.”
C.P. Snow

“Doubly rich is the man still boyish enough to play, laugh and sing as he carries and emanates sunshine along a friendly road.”
Charles R. Wiers


"Faith is not a shelter against difficulties, but belief in the face of all contradictions."
Paul Tournier

"Convictions are the mainsprings of action, the driving powers of life. What a man lives are his convictions."
Francis C. Kelley

"To do anything in this world worth doing, we must not stand back shivering and thinking of the cold and danger; but jump in, and scramble through as well as we can."
Sydney Smith

"It is often just as sacred to laugh as it is to pray"
Charles R. Swindoll

"Teachers open the door, but you must enter by yourself"
Chinese proverb

"In times of change, learners will inherit the earth,while the learned will find themselves beautifully equipped to deal with a world that no longer exists"
Eric Hoffer

"Life is what happens while you are busy making other plans."
John Lennon

"Few will have the greatness to bend history itself; but each of us can work to change a small portion of events, and in the total of all those acts will be written the history of this generation."
Robert F. Kennedy

"The difference between what we do and what we are capable of doing would suffice to solve most of the world's problems."
Mahatma Gandhi

"Determine that the thing can and shall be done, and then we shall find the way."
Abraham Lincoln

"There is nothing in life so difficult that it cannot be overcome. This faith can move mountains. It can change people. It can change the world."
Norman Vincent Peale

"Two things are infinite: the universe and human stupidity; and I'm not sure about the the universe."
Albert Einstein

"Life isn't measured by the number of breaths we take but the moments that take our breath away."
Anonymous

"Patience and perseverence have a magical affect before which difficulties disappear and obstacles vanish."
John Quincy Adams

"Whatever you do, you need courage. Whatever course you decide upon, there is always someone to tell you that you are wrong. There are always difficulties arising that tempt you to believe your critics are right. To map out a course of action and follow it to an end requires courage. Peace has its victories, but it takes brave men and woman to win them."
Ralph Waldo Emerson

Things That Make Me Happy!