We arrived at Arlanda Airport in Stockholm for our flight back to the UK...

I am never going to travel with KLM again. The flight was delayed but getting information was impossible and when we eventually mnaged to take off we were about an hour late and having misssed the connection on the way out it wasn't looking good. However, we made it to Schiphol Airport in Amsterdam and again no information and more delays but we got on the plane and we were headed back to Leeds Bradford.

We were over Leeds when the pilot told us that visibility was down to 300 metres and it looked unlikely that we would be able to land. A few moments later visibility was down to 100 metres and we were going to have to land in Manchester... but no Manchester was too busy so we were redirected to Durham Tees Valley Airport where everything was closed but at least we were on the ground. Half an hour later we were bundled into coaches and we travelled down the A1 back to Leeds Bradford to collect my car. I took Richard home and eventually got home after a journey, that should have taken four hours, lasting eight hours.

I am never going to travel with KLM again.
Chris
Posted by Chris Edwards at 11:49 1 comment:

We then were taken back to Arlanda Airport to catch our flight back to Amsterdam and Leeds Bradford...

Our two hosts, John Ellard and Jonathan Emerson from ICG, were wonderful and looked after us over the three incredible days which allowed Cllr Richard Harker and I the opportunity to visit this beautiful city, to learn a great deal, to visit some amazing schools, to renew some friendships and make some new ones.

I look forward to my next visit.
Chris
Posted by Chris Edwards at 11:43 No comments:

We went on to Tegelhagens School in Sollentuna...

This is a unique place: it caters for children aged one to eleven and their philosophy is based on the outdoors, on sustainability and learning through structured play. Eva-Lotta Kastelholm, the Principal, met us and showed us around her incredible school; we watched a teacher work with some children developing their understanding of area and shape using an Activeboard, we watched children doing handicraft; woodwork and textiles and we explored the outside!. The children spend around 80% of their time outside and they even have sleeping sheds with little sleeping bags for the children. They are also into recycling in a big way!

You can find out more about this amazing little school by visiting their website at http://www.edu.sollentuna.se/tgl/ sadly it's only in Swedish!
Posted by Chris Edwards at 11:28 1 comment:

Cllr Richard Harker and I went to Stockholm City Hall to meet Lotta Edholm, Leader of the Education Committee in Stockholm and Leader of the Liberal Democrat group on the City Council, and Hakan Edman, Head of Compulsory Education in Stockholm. It was a great meeting in a staggeringly beautiful building. 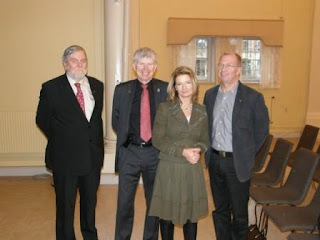 We agreed to further develop the relationship between Stockholm and Leeds in the following ways:

We are also looking to build a relationship with Helsinki to learn from the best of Finnish educational practice. If anyone out there is interested in these projects please let me know.

Lotta gave Richard and I a beautiful book about the Stockholm City Hall. It will be a fantastic reminder of a wonderful three days in this beautiful city with some fabtastic people.
Chris

Posted by Chris Edwards at 11:27 No comments:

Today was a great day, I met so many brilliant colleagues and made so many friends...

The Stockholm Inspirational Leadership Seminar was at Norra Latin, in central Stocholm, and I talked to colleagues from across Stockholm. We then drove to Sollentuna to have lunch with Maria Stockhaus, Leader of their Education Committee, and Camilla Wallstrom, their Director of Education. We then drove to their municipal centre to deliver the Inspirational Leadership Seminar in their fantastic new conference facility where they also hold their council meetings. 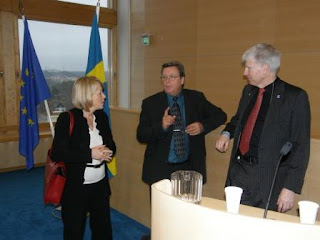 There is so much we can learn from each other, to help us both build brilliant provision consistently across our two great cities. Camilla gave me a copy of the 'lonely planet' city guide to Stockholm as a thank you and to encourage me to come back some time to explore their beautiful city!
Chris
Posted by Chris Edwards at 16:30 1 comment:

Today I am doing two 'Inspirational Leadership in Education' seminars here in Stockholm and in Sollentuna...

The focus is on the Education Leeds story and how through strong, passionate and disciplined leadership we have changed the educational landscape. How through high expectations, a relentless drive for excellence and a culture that is about openness, honesty, trust and empowerment we have achieved magic!

I am doing my affirmations and visualisations and I'll let you know how it goes.
Chris
Posted by Chris Edwards at 06:52 No comments:

I started the day early at Leeds Bradford airport. Cllr Richard Harker and I were off to Stockholm on the 6.05...

Sadly KLM had a problem with the plane and we were stuck at Amsterdam's Schiphol Airport for three hours and finally arrived in Stockholm at 2.30! Still we managed to visit Nya Elementar School in Bromma; a brilliant compulsory school on the western edge of Stockholm. It is a school with 750 children aged between 6 and 16 and is the only secondary school to have won the Stockholm Quality Award twice. The school is divided into three sections:
We were met by Lars Gustavsson,the Headteacher, and Nina Jonsson, one of the Deputy Headteachers, who outlined the schools unique features. We were then shown around the school by some fantastic students who told us what it was like to be a student at Nya Elementar School.

It was a brilliant start to our visit.
Chris
Posted by Chris Edwards at 17:26 2 comments:

My colleague Maxine Squire, one of our Secondary School Improvement Advisers, sent me this...

"Chris, I just wanted to highlight the event I attended at Wortley High School yesterday evening as an example of the good work the school is doing to engage Year 7 pupils and their parents. I was invited to attend their Year 7 Art Exhibition which was used to showcase the work that Year 7 have produced as part of the Year 7 project based curriculum that has been developed at Wortley. It was a really wonderful opportunity for parents to engage with the school and was very well attended. It was really great to see the impact the project work has had in improving pupil motivation and engagement with the secondary school curriculum and I felt sure you'd want to know about the good things that are happening at Wortley.
Best wishes Maxine"

It is wonderful to hear about areas where we are doing brilliant things.
Chris
Posted by Chris Edwards at 17:36 No comments:

Colleagues have asked how they can keep in touch when I leave Education Leeds.
You can send me an e-mail at chrisedwards51@hotmail.com.
You can also continue to visit this blog or my new blog http://releasing-the-magic.blogspot.com/.
Keep the faith!
Chris

Every school I have ever visited has outstanding practice, outstanding colleagues and things worth sharing! Please let me know if there is anything you want to share and celebrate.
Chris

“I must accept life unconditionally. Most people ask for happiness on condition. Happiness can only be felt if you don't set any condition.”
Margaret Lee Runbeck

“Most true happiness comes from one's inner life, from the disposition of the mind and soul. Admittedly, a good inner life is difficult to achieve, especially in these trying times. It takes reflection and contemplation and self-discipline.”
William L Shirer

“The pursuit of happiness is a most ridiculous phrase: If you pursue happiness you'll never find it.”
C.P. Snow

“Doubly rich is the man still boyish enough to play, laugh and sing as he carries and emanates sunshine along a friendly road.”
Charles R. Wiers


"Faith is not a shelter against difficulties, but belief in the face of all contradictions."
Paul Tournier

"Convictions are the mainsprings of action, the driving powers of life. What a man lives are his convictions."
Francis C. Kelley

"To do anything in this world worth doing, we must not stand back shivering and thinking of the cold and danger; but jump in, and scramble through as well as we can."
Sydney Smith

"It is often just as sacred to laugh as it is to pray"
Charles R. Swindoll

"Teachers open the door, but you must enter by yourself"
Chinese proverb

"In times of change, learners will inherit the earth,while the learned will find themselves beautifully equipped to deal with a world that no longer exists"
Eric Hoffer

"Life is what happens while you are busy making other plans."
John Lennon

"Few will have the greatness to bend history itself; but each of us can work to change a small portion of events, and in the total of all those acts will be written the history of this generation."
Robert F. Kennedy

"The difference between what we do and what we are capable of doing would suffice to solve most of the world's problems."
Mahatma Gandhi

"Determine that the thing can and shall be done, and then we shall find the way."
Abraham Lincoln

"There is nothing in life so difficult that it cannot be overcome. This faith can move mountains. It can change people. It can change the world."
Norman Vincent Peale

"Two things are infinite: the universe and human stupidity; and I'm not sure about the the universe."
Albert Einstein

"Life isn't measured by the number of breaths we take but the moments that take our breath away."
Anonymous

"Patience and perseverence have a magical affect before which difficulties disappear and obstacles vanish."
John Quincy Adams

"Whatever you do, you need courage. Whatever course you decide upon, there is always someone to tell you that you are wrong. There are always difficulties arising that tempt you to believe your critics are right. To map out a course of action and follow it to an end requires courage. Peace has its victories, but it takes brave men and woman to win them."
Ralph Waldo Emerson

Things That Make Me Happy!